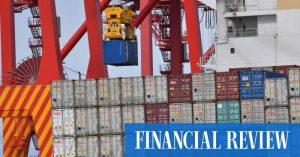 UBL signed the agreement with Qube on fumigation of sea containers as Australia battles to keep out invasive insects and other pests.

As the article states, the agreement comes as farmers – represented by Grain Producers Australia (GPA) – continue to push for a levy on sea containers which they see as the most likely source of pests like stink bug and Khapra beetle entering the country and could cost the industry $15.5 billion over 20 years if they gain a foothold here.

Read more in the article below. Please note this article is only available in full to digital subscribers of the AFR.